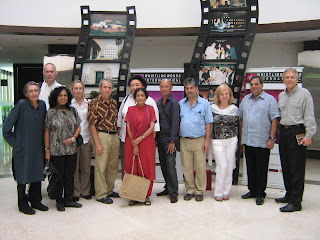 Film City, a state-government run enterprise, stretching out on 400 acres is known as Mumbai’s green lung. During the monsoon months, thickets and trees turn into a deep green and grass sprouts wildly all around. Whistling Woods International (WWI), a 20 acre film school (billed as Asia’s largest) , is set amidst this sylvan terrain. It regards itself as the third real film and media studies centre after the Film and Television Institute of India in Pune and the Satyajit Ray Film and Television Institute in Kolkata.

WWI is a recent creation. Established in 2006 by one of the best known producer-director-screenwriters in the industry, Subhash Ghai, it is a complete film school, offering a two-year course not just in film, television and media arts but in broadcasting and media management as well. It covers direction, production, screenwriting, editing, cinematography and sound recording and design. There’s an MBA in Media and Entertainment as well, a part-time screenwriting course, a school of animation and an actor’s studio.


At first glance, the fee of USD35,000 (including boarding and lodging) may seem prohibitive, but the management claims this is just a fourth of global standards, and hence much more affordable than universities abroad. Nevertheless, the revenue from the film school is the largest in Asia.

For a new arrival on the scene, WWI is already bouncing with ambition and a sense of purpose. Its goal is to blossom into a ‘world-class media and entertainment facility.’ Only into its fourth year, it is already a member of the select Global Association of Film Schools, and is leveraging itself internationally. Plans are on to open campuses in other countries (“the search is for virgin markets”), beginning shortly with Spain (where an agreement has been signed) and moving on over three years to Hyderabad (land acquired), Kolkata, Dubai/Abu Dhabi, London, South Africa and/or Mauritius and Mexico and Bermuda.

A group of seven foreign delegates – all of them authors, scholars and writers on cinema – who had attended the International Conference on the Culture and Politics of Asian Cinema organised by NETPAC in New Delhi (18-22 August 2010) as guests of PD, MEA, visited WWI to see for themselves what the Institute had to offer.

The school’s 400-odd students (of all ages, some as young as 17 and others as old as 45) come from diverse educational backgrounds, but the Institute prefers graduates for all courses except acting. They follow a common foundation programme – including theory – for the first eight months, then branch out into specialised courses over the next eighteen. The broad-based curriculum covers film appreciation, history of cinema, music, international art, literature and culture as well as production design.

The stress, though, is overwhelmingly on the practical side of filmmaking. Each student is heavily engaged in production work, and by the end of two years, he has worked hands-on in six films, moving from simple handy cams to upper end high definition cameras. All the films are funded by the Institute.

We watched the shooting of Paschim Express- With Love (a new Mukta Arts film due for release in March next year) in the company of Subhash Ghai who proudly informed us that the film’s cast and crew were all WWI alumni. “We ask them to be clear about their objective,” he said. “Is this going to be a mainstream film or is it not?”

In the course of a lively interaction with Ghai, spoke of why he had set up his school. “There are many film families in India but I did not have any connections when I was growing up. While there a good deal of instinctive talent here, the opportunities to discover it, to learn, un-learn and relearn things are few. Earlier filmmakers created studios for their children but provided no knowledge, experience or money for others.” Ghai raised funds from the market and spent two years with his team researching on how to run a school, and how to adapt the curricula he studied in India and abroad to local needs. “We had to include Indian culture and heritage because we must tell our stories to the world,” he said.

His way to ensure the best for his Institute was to rope in good teachers and pay them well. He would like students to develop their own passions and force nothing on themselves. “We don’t teach them so much as interact with them. Films, after all, reflect society. It’s a question of demand and supply. When a country develops, its cinema changes.” The presence of international students (15% of the student body; half of the rest are NRIs), Ghai believes, is cultural communication at its best. “Our courses give the foreign student scope to explore Asia and its stories, it is new human experience.”

WWI has brought together some of the best minds from the entertainment industry to form its faculty, Academic Advisory Board and Governing council. While the Governing Council boasts names such as (among others) Anand Mahindra and Kiran Karnik, the AAB is a who’s who list in cinema: Shyam Benegal (Chairman), Dilip Kumar, Shabani Azmi, Javed Akhtar, Hema Malini, Nagesh Kukunoor, Naseeruddin Shah, Shahrukh Khan, A R Rehman, Ashutosh Gowarikar, Om Puri, Karan Johar and many others. The faculty itself comes with a ten to fifteen year experience, and combines teaching with the real world of production, alternating between the classroom and film set. And a large guest faculty is brought in to enrich the content. This includes celebrated names in the world of film: Danny Boyle (UK), Claude Lelouch (France), Theo Angelopoulous (Greece), Dan Wolman (Israel), Guillermo Navarro (Mexico) and Tom Abrams USA).

Observations from some of the delegates who visited Whistling Woods:

"At Whistling Woods we got a glimpse of the future of Indian cinema where students from around the world learned the techniques behind putting their dreams onto celluloid. I look forward to reporting at greater length on these two very different dream factories."

-Patrick Frater (Hong Kong): operates F Media, a consulting and co-production advisory business which works with producers, festivals and financiers. Co-founder of Film Business Asia (www.filmbiz.asia), a next-generation film trade publication. Formerly Asia editor at Variety and international editor at Screen Int.
“This is a part of India’s efforts for a globalised impact.”

“I was impressed by Mr Ghai’s participation in the film shooting, and by his story: how he found the professionals and the staff; how he handed it all over to another generation; and how he yet works with the young.”

-Gulnara Abikeyeva (Kazakhstan): well-known film historian, critic, editor, author and Professor at the Kazakh State Institute of Cinema and Theatre, and Artistic Director, International Eurasia Film Festival.
“For the further growth and development of Indian film industry, Whistling Woods is a well-planned project to take it to a higher level.”

-Mark Schilling (Japan): author and film critic; has been living in Japan since 1975 and writing on Japanese cinema since 1989 for many publications. He is the senior film reviewer for The Japan Times and Japan correspondent for Variety.
Posted by Indian Diplomacy at 9/06/2010