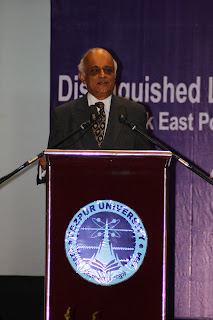 Former External Affair Secretary Amb. Sudhir Devare addresses Tezpur University
Ambassador Sudhir T Devare, Director General of the Indian Council of World Affairs and a former Secretary in the Ministry of External Affairs, Government of India delivered a Lecture on “India’s Look East Policy vis- a –vis the North East : Issues and Concerns” at the Kalaguru Bishni Prasad Rabha Auditorium of Tezpur University yesterday, August 27. The lecture was organized under the aegis of the Public Diplomacy Division of the Ministry of External Affairs as one in the Distinguished Lecture Series being initiated by the Division from this year. Speaking to a packed audience of the students, research scholars, faculty members and other dignitaries, Ambassador Devare dwelt upon the genesis of the Look East Policy and its ramifications and implications in the broader context of the new global economic realities and the perspective of the north east. While tracing the origin of the Look East policy in the 1994, Mr. Devare pointed out that India has been historically involved with providing global and regional leadership right from the years following our independence as witnessed in the pivotal role played by India in the Non Aligned Movement. Referring to the aspects of foreign policy dynamics and its evolution with the changing geopolitical developments, Mr. Devare pointed out to the post Soviet Russia disintegration shifts in global geopolitics and its consequences.
Read more »
Posted by Indian Diplomacy at 8/30/2010 3 comments: 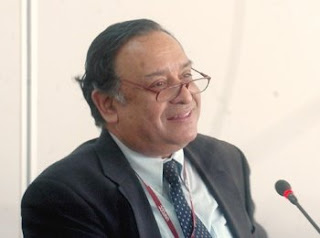 I am delighted to have an opportunity to address alumni of the Bangalore University on the subject of climate change and Indian diplomacy. Twenty years ago, most people thought of climate change as an esoteric subject reserved for meteorologists and atmospheric scientists. When I first became deeply involved with climate change issues in 1990, it raised many eyebrows and I was frequently asked why a Foreign Service officer should spend his time on climate change. Indian diplomats today do not have to field such questions. Climate change is recognized as one of the most important global issues confronting humankind. It figures prominently on the agenda of virtually every major international summit.

Nature of the climate change problem

Why is this so? What is the nature of the climate change problem?

Our planet has experienced several cyclical climatic changes over the ages because of the operation of the forces of nature. The current phenomenon of global warming is, however, unprecedented. Its unique feature is that it is not caused by nature but by human activities. Its primary cause is the ever-increasing consumption of hydrocarbon fuels – coal, petroleum and natural gas - since the beginning of the Industrial Revolution. Combustion of increasing quantities of hydrocarbon fuels has generated a corresponding increase in emissions of carbon dioxide- the main greenhouse gas – into the atmosphere. The build-up, or concentration, of greenhouse gases in the earth’s atmosphere is causing the phenomenon of climate change or, in popular terminology, global warming. Unlike the cyclical climatic changes of past eras, the phenomenon we are confronting today has been caused by human beings.