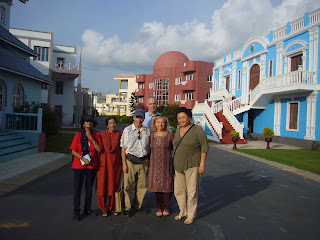 The group was invited and hosted by Public Diplomacy Division of MEA in connection with the Netpac film festival. ( At Fancy Street, Ramoji Film City)
Ramoji Film City, an hour’s drive from Hyderabad, is a total package. Vast (it sprawls over 1666 acres) and monumental, extravagant and flamboyant, it appears to be, at first a collection of sets for cinema. In the words of its founder, Ramoji Rao, “it is a gateway, a one-stop shop for directors, providing every single item they may ever need… All you have to do is walk in with a script and walk out with a canned film.” And every in-betweens can be found right here.

The world’s largest studio, according to the Guinness World Records, there’s not a service Ramoji Film City does not provide: production paraphernalia, audio and video post-production (the audio lab is particularly remarkable, with its data-base of sound effects and its networked sound facility), film lab, high-end technology, state-of-the-art cameras, set design, costumes, props and, above all, locations. There’s enough infrastructure here to host 200 productions a year and an unlimited number of TV programmes. Ramoji Rao, owner of Eenadu TV and its twelve channels, says his offerings are far cheaper and more productive than any in Mumbai, and there’s scope for growth.


The sets are what catch your eye as you drive down the immaculate roads. Atop a hill is Hawa Mahal for romantic shots and Fantasy Street for honeymoon scenes. The terraced Moghul Gardens with fountains and running water are for a regal ambience. An airport (with a replica of an aircraft), a train station (with a train) where crowds can be drummed up, a bazaar, a village backdrop, atmospheric Kerala homes, a hospital, a prison, a post office, Greek and Roman statuary, and Konarak-style grandiose statues of buxom Indian women. There is the mandatory temple (“godless temple,” said our guide, “the directors can bring in his own gods!”), the mosque, the palace and a South Indian market. More, for “foreign shots” there is a replica of London’s Princess Street (“front side London, back side India!”). Landscaped gardens against elegant Rajasthani-style architecture (for marriages of the wealthy) and animals carved out of bushes, a Japanese garden (for aesthetics and meditation), and an Arizona garden full of sand and prickly cacti (“for sad scenes”). And then there is the tree-lined “national highway” where you can shoot (especially at night) some of the basic stuff of Indian cinema: car accidents, kidnappings, hijackings, chases, bomb blasts and terrorist attacks. As we drive down the hill, our guide points in a practical way to a ledge between boulders on the slope. “Suicide point, madam.” All these are ready-to-shoot options, but should filmmakers desire none of this (Shyam Benegal’s Welcome to Sajjanpur was shot here) you only have to ask.

In a chat with a group of foreign delegates who were visiting the City following an international conference on cinema organised by the Network for the Promotion of Asian Cinema in New Delhi and supported by PD, MEA, Mr Rao said that films in several Indian language have been made here, a bulk of them in Telugu, but as well in Tamil, Malayalam, Hindi, Bengali, Oriya, Kannada. “We have had a couple of international productions, but there was some hesitation after 9/11 because of the reputation for terrorism in Hyderabad.”

But there’s much else besides film accoutrements. The City’s website tells you of the full tourism package it offers: holiday packages, hotels, health clubs, spas, multi-cuisine restaurants, provision for special and corporate events, weddings (with “innovative mandaps”) and honeymoons, theme parties and stunt shows. Ramoji Movie Magic gives “an audio-visual illusion of reel world” and you can be a part of special effects.

A dream world unto itself, as Indian cinema would want it.

“Our tour was eye opening in the way that it revealed the diversity of possibilities within India for the film industry. At Ramoji Studios we go to see the most extraordinary movie-making complex. With its landscapes, gardens, standing sets and multiple sound stages, truly anything could be shot on campus.”

-Patrick Frater (Hong Kong): operates F Media, a consulting and co-production advisory business which works with producers, festivals and financiers. Co-founder of Film Business Asia (www.filmbiz.asia), a next-generation film trade publication. Formerly Asia editor at Variety and international editor at Screen Int.
“From my point of view, coming from a country with no studios, this has left a big impression. Have seen many world studios but nothing this large.”

-Intishal al-Timimi (Iraq): Curator of Arab films for the Abu Dhabi International Film festival; photographer, journalist, former Artistic Director of the Arab Film Festival in Rotterdam, and programme advisor for several international film festivals.
“I am impressed that it is the largest cinema city in the world. But I expected more activity. I saw many empty spaces and this is a paradox.”

-Gulnara Abikeyeva (Kazakhstan): well-known film historian, critic, editor, author and Professor at the Kazakh State Institute of Cinema and Theatre, and Artistic Director, International Eurasia Film Festival.
“I am privileged to be part of this exciting trip to Ramoji Film Studios. It is a dream world for the cinema industry and for lovers of cinema. Thank you for making it possible.”

- Gonul Donmez-Colin (Turkey): well-known critic, editor, author, independent researcher and specialist in the cinemas of Turkey, the Middle East and Central Asia.
“Quite an amazing eye-opener for a varied group of film journalists to experience first hand the rich pleasures of India’s unique practices for their own brand of cinema.”
-Ed Lejano (Philippines): freelance film journalist, filmmaker, and currently Director of the University of the Philippines Film Institute. Former Programme Director of the International Academy of Film & Television (IAFT/Bigfoot Entertainment) in Cebu.
“This is an Indian version of Universal Studios; it resembles the Amwrican magnate William Randolph Hearst’s mansion, Hearst Castle, in California – a grand personal vision open to the public."
-Mark Schilling (Japan): author and film critic; has been living in Japan since 1975 and writing on Japanese cinema since 1989 for many publications. He is the senior film reviewer for The Japan Times and Japan correspondent for Variety.

“These are impressive, indeed fantastic studios, bet very little is known about them internationally. The hotel food is excellent.”