Day 2 of the BCIM Car Rally started at 7:30am and our destination for the day was Dhaka which was 230km away from Jesoore. Dhaka is the both the capital and largest city of Bangladesh. Geographically speaking, it is located in the center of the country and is served by the port of Narayanganj. It is a city that is rich in history and culture and it is known internationally as 'the City of Mosques and Muslin'. No trip to Bangladesh is complete without first visiting Dhaka.
En route Dhaka we had to cross the river Padma via Ferry. The Padma river is the main distributary of the Ganges and it enters Bangladesh from India near Chapai Nababganj. This was the only Ferry ride of the entire trip from Kolkata to Kunming, which made it all the more special and exciting. 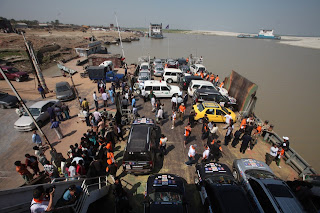 Throughout our travel the warmth and humanity in the people was very clear from the way school kids lined up on the road holding the flag of Bangladesh and people from villages came up to us with snacks and handing out flowers. 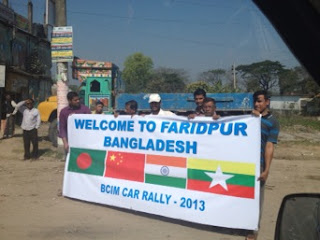 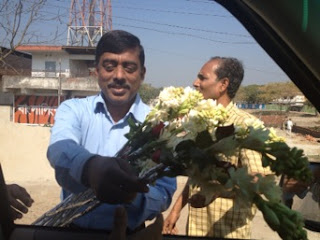 Bangladesh definitely feels like home. The first stop for the day was the National Martyrs Memorial at 1:30pm. Although it was a long drive and everyone was tired, the beauty of the memorial enamored us. The monument is composed of 7 isosceles triangular pyramid shaped structures, with the middle one being the tallest.

All the 4 country leaders namely Mr. Cheng Yunchuan, Mr. Mohammad Delwar Hossain, Mr. Sunil Misra and Mr. Ne Win paid their tributes at the memorial. This was followed by a delicious lunch and 33km of travel towards Dhaka. 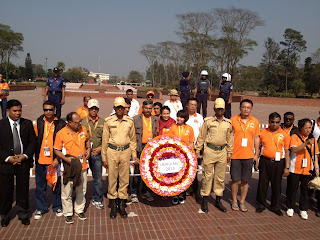 Heavy traffic welcomed us as we entered Dhaka but the police were cooperative and kind enough to guide us through the busy streets towards the Banganandhu Sheikh Mujibur Rahman Memorial Museum. This is the house of the Father of the Nation of Bangladesh, Bangabandhu Sheikh Mujibur Rahman. We were also made to cross the National Parliament Premises. The architecture of the monument was breathe taking. 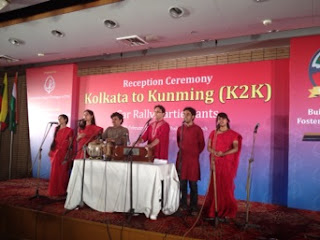 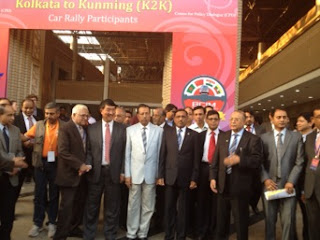 Our last stop for the day was the Bangabandhu International Conference Center, where the Minister of Communications welcomed us. The warm welcome was followed by a cultural show where poems of Rabindranath Tagore were recited. The team leader of the Indian team, Mr. Sunil Misra beautifully highlighted the fact on how the BCIM Car Rally is all about fostering friendship among the BCIM nations as the participants of the rally were already singing songs and sharing jokes in less than 2 days.
We then left for the hotel where the Minister had hosted a lovely dinner along with some nice music by the pool side. The BCIM Car Rally participants would like to thank the Hon'ble Minister for being such a welcoming host.
Posted by Indian Diplomacy at 2/24/2013